The Mahayana (Great Vehicle) Buddhism was established around the first century. One of the reasons for its prosperity was the further involvement of the lay practitioners who believed that the preaching and explanation of Buddhist dharma should not be limited to monastic practitioners. They started to publish books emphasizing the Bodhisattva practice of improving oneself as well as benefiting others. They developed a new, advanced, and more broad-minded path. This led to the establishment of many orders composed of lay practitioners. In Mahayana sutras, the most well-known lay practitioner is Vimalakirti (aka Weimojie) in the Vimalakirti-Nivdesa Sutra (aka the Weimojie Suoshuo Jing), who dedicated himself in promoting Buddhist dharma. The next well-known lay practitioner is Ms. Shengman in the Shengman Jing and Shancai Tongzi in the Avatamsaka Sutra (aka the Huayan Jing), who visited fifty-three lay practitioners, such as Brahmins, ferrymen, incense merchants, etc. to receive teachings towards enlightenment. The Ten Great Disciples of Shakyamuni Buddha however were not mentioned in these sutras. 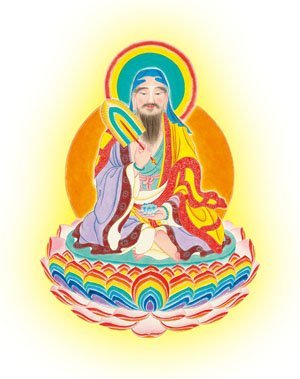 the most well-known lay practitioner, Vimalakirti (aka Weimojie)

After the Mahayana Buddhism entered into China, many of the sutra translators in the early stage were also lay practitioners as well. Such as Anxuan in the Houhan Dynasty, Wu Zhiqian in the Sanquo Dynasty, and Nie Chengyuan in the West-Jin Dynasty. Monk Kumarajiva (aka Luoshi) in the Houhan Dynasty was crucified by the emperor and became a lay practitioner thereafter. Later on, many scholars, nobles, royalties, even kings and emperors contributed to the feeding of the monks, building the temples, promoting the teachings, and printing of Buddhist literature, such as Xie Lingyun in the Liusong Dynasty, Xiao Ziliang in the Xiaoqi Dynasty, Emperor Wu in the Liang Dynasty, Wang Wei and Bai Juyi in the Tang Dynasty, and King Zhongyi in the Wuyue Dynasty.

Regarding the lay Buddhist organizations, the “White Lotus Society”, established by Huiyuan of the East-Jin Dynasty in the Lushan Mountain, with a membership of both lay practitioners and monks, played a most significant role. One hundred and twenty-three people, such as Liu Yimin, Zhou Xuzhi and Zong Bing, vowed to be reborn in the western pure land. This type of Buddhist chanting organizations remained very popular in the Tang Dynasty, such as the Nine Class Rebirth Society in Huiji. These organizations peaked in the Song Dynasty, and about twenty of these organizations still now remain. Among them the Society of Karma Purification, established by Ling Zhao, had a membership of over 20,000. It included both monastic and lay Buddhists. The Ruo Guan’s organization had a membership of 100,000 and almost half of the teachers were lay practitioners. Confucian scholars in the Song Dynasty, such as Zhu Xi, Cheng Hao, and Zhou Dunyi, were also well versed in Buddhism. In addition, Wang Chongyan, founder of the Quan-Zhen Tao, passionately advocated Chan Buddhism. It was well supported by the Buddhist monastics. Thus this movement gave rise to a three-in-one approach and interchange, combing Confucianism, Buddhism and Taoism.

By the Ming Dynasty, lay practitioners made rapid progress in teaching and studying Buddhism. They compiled an incredibly large numbers of annotated Buddhist scriptures and volumes of recorded Chan sayings. Daizong Xintai, a monk in the early Ming Dynasty, edited a book entitled “The Impregnable Fortress of Buddha Dharma”, recorded the biographies and quotations of emperors and scholars for a period of 1,700 years, from the era of King Zhao of the West-Zhou Dynasty up to Emperor Shun of the Yuan Dynasty. Those featured in the book were all lay practitioners, a total of 398 people, and at the end of each biography all the sources used were cited.

Peng Shaosheng of the Qing Dynasty wrote “Biographies of Lay Practitioners” which recorded the words and deeds of over 200 lay practitioners from the East-Han Dynasty to the Qianlong Era of the Qing Dynasty. It adopted stories recorded in history books, works of various scholars as well as other sources, such as “Hongming Ji,” “Guang Hongming Ji,” “the Impregnable Fortress of Buddha Dharma,” “Record of the Transmission of the Lamp,” “A Summary of the Five Lamps,” “the Records of the Buddhas and Patriarchs,” and “A Comprehensive History of the Buddhas and Patriarchs.” The book began with Mu Rong, An Xuan, Zhu Shulan and others. It ended with Zhou Anshi and Zhi Guizi. The fact that multiple biographies of lay practitioners appeared in the Ming and Qing Dynasties provides evidence that lay Buddhist practice has become quite trendy back then, and that it has been well acknowledged that lay practitioners could also practice and preach Buddhist dharma and attain enlightenment.